As the primary symbol of British power in Tahiti during Cook and Banks’ stay on the island, Fort Venus played a symbolic as well as practical role. Practically, Fort Venus was a site of astronomical observation and defense from the natives. Aside from these roles related to the Endeavour’s primary mission, the fort also served as a site of cultural interaction and exchange, hospitality, punishment, and, symbolically, as a means of delineating the Tahitian physical space. The digital visualization of Cook and Banks’ travelogues reflects the varied functionality of Fort Venus during their stay. The manmade colonial space was more than a site of defense for the British—the encampment provided a consistent place for trade, controlled movement of both Europeans and Tahitians, and acted as an entry point to the island from the British ship. In his entry from April 15, 1769, Cook describes the construction of Fort Venus. Very concerned with the division of space around the fort and seeking concrete ownership of it, Cook writes that once he and his men had chosen appropriate land for the fort, they “set up the Tent and Mark’d out the ground [they] intended to occupy.”[1]Cook draws a literal line around the space for the intended fort and uses the word “occupy” in describing their relationship with this space, illustrating his mentality: the physical organization and division of land would be integral in defining power relationships between Tahitians and Europeans. After Cook draws lines in the sand to demarcate the European space, he continues:

a great number of the Natives had got collected together about us, seemingly only to look on as not one of them had any Weapon either offensive or defensive – I would suffer none to come within the lines I had marked out excepting one who appear’d to be a Chief and old Owha^amo  to these two men we endeavour’d to explain as well as we could that we wanted that ground to sleep upon such a number of nights and than we should go away-  whether they understood us or no is uncertain, but no one appear’d the least displeased at what we was about – Indeed the ground we had fix’d upon was of no use to them being part of the Sandy beach upon the shore of the Bay and not near to any of their habitations.[2]

Cook assumes that the Tahitians’ view of relationship between land, space, and power parallels his own. He mentions that the

Tahitians gathered around the space with no weapons. Cook would not have included this remark unless he had expected the Tahitians to react to the delineation of the fort’s space with aggression. Cook also excuses the crew’s choice of land for the fort, arguing that the land that they had chosen was “of no use” to the Tahitians because of its infertility and distance from any of their habitations. Inherent in Cook’s judgment of this space is an assumption that the Tahitians based the desirability of land on its location and potential resourcefulness. Jennifer Newell argues that Europeans and Tahitians viewed the landscape in fundamentally different ways, with eighteenth century Romantic explorers attributing importance to “the essential, civilizing, wholesome practice of agriculture,” especially with the decline in Britain’s own rural population toward the end of the century.[3] For the eighteenth century European explorer, mastery over land—such as the building of Fort Venus—held civilizing power. 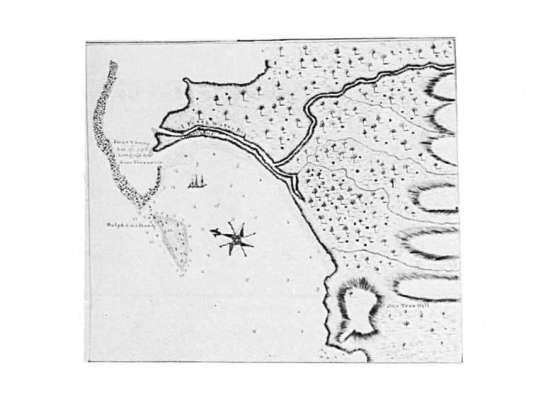 Themes of colonial power and authority manifest themselves in Sydney Parkinson and Herman Spöring’s drawings of Fort Venus and their evolution over time. A set of six drawings features the fort, three done during the voyage in 1769 and three done once the crew arrived back in England in 1771. Three of the drawings were probably done by Spöring and during the Endeavour’s stay in Tahiti.[4] Two of these feature views of Fort Venus from Matavai Bay to the west, and one is “A View from the Point at Otaheite,” depicting the scenery along Matavai Bay with a small portrayal of Fort Venus drawn to the far left. It is this large-scale view that offers an insight into perceptions of power relations on the island.

“The Bay where the Endeavour anchored with the Encampment on Shore” also labeled as “A View from the Point at Otaheite”
From “A Collection of Drawings made [by A. Buchan, S. Parkinson, and J.F. Miller] in the Countries visited by Capt. Cook in his First Voyage 1768-1771; also of Prints Published in Hawkesworths Voyages of Biron Wallis and Cook as well as in Cook’s second and third Voyages, Vol. 2nd”
British Library Add. MS 23921 plate 41.

Unlike the other two Spöring drawings that depict a Fort Venus isolated from its surroundings and void of any indication of Tahitian presence, the large-scale view places the fort on the periphery of the scene, instead focusing on the Tahitian landscape and vast bay in which the Endeavour was anchored. Tahitian dwellings dot the shoreline among evenly placed palm trees, small in comparison to Fort Venus. The fort appears well defended but far from an imposing structure as compared to the mountains rising up from the coast. Moorea is visible in the distance, and a Tahitian canoe sits in the water opposite Fort Venus on the right side of the drawing. This is the only original drawing of the fort by Spöring that places it in the context of the Tahitian landscape. The inclusion of Tahitian dwellings in this drawing reflects the proximity of Tahitian manmade space to European manmade space. The Endeavouris not included in this drawing even though it was anchored in Matavai Bay across from the fort. The absence of the ship could have been simply an aesthetic choice so that its presence would not disrupt the view of the Tahitian coast, but its absence makes Fort Venus the only symbol of European power on the island, setting the fort apart as symbolically significant while simultaneously including it as part of the Tahitian landscape.

A View of Fort Venus by Spöring
From “A Collection of Drawings made [by A. Buchan, S. Parkinson, and J.F. Miller] in the Countries visited by Capt. Cook in his First Voyage 1768-1771; also of Prints Published in Hawkesworths Voyages of Biron Wallis and Cook as well as in Cook’s second and third Voyages, Vol. 2nd”
British Library Add. MS 23921 plate 43.

“our little Encampment in Otaheite” by Spöring
From “A Collection of Drawings made [by A. Buchan, S. Parkinson, and J.F. Miller] in the Countries visited by Capt. Cook in his First Voyage 1768-1771; also of Prints Published in Hawkesworths Voyages of Biron Wallis and Cook as well as in Cook’s second and third Voyages, Vol. 2nd”
British Library Add. MS 23921 plate 43.

A variation in aesthetic context creates the contrast between this Spöring drawing and any other involving Fort Venus. His other two drawings are similar: both are views of the fort in isolation, and both are void of any human presence. He depicts Fort Venus from the bay to the west and includes only some vegetation in the background to contextualize the encampment within its environment. This mode of representation is indicative of a style “increasingly less dominated by neo-classical theories of art and increasingly more influenced by empirical habits of vision.”[5] In certain ways, these drawings of Fort Venus are more similar to scientific coastal views than scenic drawings. From its inception in 1660, Britain’s Royal Society asked their seamen to record “Plotts and Draughts of prospects of Coasts, Promontories, Islands and Ports, marking the Bearings and Distances, as neer as they can,” and men like Samuel Pepys taught the skills required to make these types of drawings at his Drawing School at Christ’s Hospital as early as 1693. Artists and navigators drew coastal views from the perspective of a ship approaching land to aid in recognition of territories and strategic anchorage. [6] Spöring’s original sketches of Fort Venus probably served to show the anchorage of the Endeavourbut also provided documentation of their voyage for the Royal Society and Admiralty at home in England.

Once the crew of the Endeavour arrived in Britain in 1771, artists created additional drawings of Fort Venus based on Spöring’s original sketches [see image above]. Smith and Joppien argue that Charles Praval was the artist; Beaglehole argues that it was Cook himself.[7] Among these drawings were two that included specific measurements and “References” labeling each structure within the fort. The artist labeled “Mr Banks’s Tents,” “The Observatory,” “Officers Tent,” “Mens Tent and Guardroom,” “Cook-room and Smith Forge,” and “Coopers and Sailmakers Tent” on the first drawing, in which the fort is depicted from the same western perspective as in the Spöring originals. On the second chart, drawn from above as a kind of floor plan, the artist labels these same structures in addition to “The Clock,” “Magazine,” “Oven and Cook-rooms,” “Necessary House,” “Carriage House,” and “Swivels.” While these depictions of Fort Venus were drawn after the Endeavour’s arrival back in Europe, neither these nor any other image specifically of Fort Venus was published in Hawkesworth’s An Account of the Voyages. Even the Cheevers engraving of Tahiti included in Hawkesworth does not include a reference to Fort Venus. The only visual reference made to the fort in Hawkesworth’s publication is a small portrayal of the encampment in the background of an engraving entitled “A View of Matavia Bay in Otaheite…from One Tree Hill.” The conspicuous absence of portrayals of Fort Venus and, therefore, British presence, in Hawkesworth’s publication is perhaps indicative of a desire to make Tahiti exotic—“a terra incognita” untamed and untouched by European civilization—for readers back home.[8]

[8] Rousseau and Porter, Exoticism in the Enlightenment, 5.